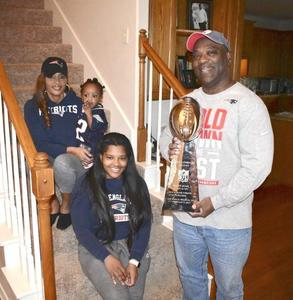 The family of Patriots linebacker Elandon Roberts — from left, mother Stephanie Roberts, niece Kyleigh Williams, sister Elondria and father Eli — would like to get their hands on another Vince Lombardi Trophy, or at least a replica of it.

The city, not the Falcons.

“We drove up there, then, and enjoyed the drive,” said Eli Roberts, Stephanie’s husband and Elandon’s father.

That’s how he decided to drive back to Atlanta for Super Bowl 53 — Elandon’s third straight world championship game.