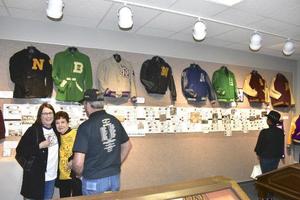 Having grown up across the country as a traveling architect’s daughter, Sarah Bellian did not understand why high school sports are important in Southeast Texas.

After a childhood in which she didn’t participate in any team sports, she recently joined a roller derby team in Beaumont and began to understand their importance in local culture.

The sense of belonging was an impetus for the former curator at the Museum of the Gulf Coast to organize the “Southeast Texas Sports: Hometown Heroes” exhibit, which opened Saturday and will be on display through May 4 in the museum’s Dunn Gallery. Bellian, who now works with the Jefferson County Historical Commission in Beaumont, even shed her alma mater Western Colorado University sweatshirt to reveal her team jersey during a speech.

“It has been about a year in planning,” said Bellian, who also solicited help from local sports journalists for entries and information. “When I resigned in November, this was pretty much ready to go, and I came back to put it up with the help of two of our museum volunteers, Stephanie [Orta] and Brittany [Delagarza]. They came late at night and we came in on the weekends and we got this all put together.”

Alumni from past and present high schools in Southeast Texas have donated or loaned high school artifacts to the museum, such as letterjackets, jerseys, helmets, photos, yearbooks and spirit gear. Museum director Tom Neal said such contributions are still being accepted.