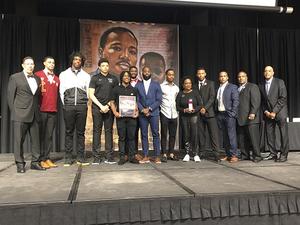 For the 33rd year, the Martin Luther King Jr. Support Group on Monday hosted a celebration of the civil rights leader’s legacy at the Robert A. “Bob” Bowers Civic Center.

King’s birthday was Jan. 15, but the national holiday recognizes the civil rights leader on the third Monday of January.

The event started off with a brunch before recognizing many individuals and groups who attended from local elected officials to sponsors.